Best of the Adventures of Ozzie and Harriet (4 DVD Set) 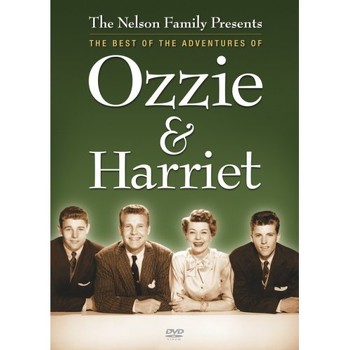 SKU: 8240
Add to Cart
The Adventures of Ozzie and Harriet? The title alone is amusingly absurd. Unless your idea of adventure includes picnics, hay rides, recreational horseback riding, and square dances, the word hardly applies. As revealed in this four-disc, 24-episode boxed set (the first official Ozzie and Harriet release on DVD) that cherry-picks some of the best moments from the entire 1952-66 run, this was a show so mild it made Mr. Rogers' Neighborhood look like The Wire--and that was a big part of its considerable charm.

Bandleader Ozzie, singer Harriet (nee Hilliard), and sons David and Ricky had already been on the radio for several years before the television show appeared; there had also been a feature film, Here Come the Nelsons (with Rock Hudson). The TV series, likely the only one ever to feature an entire family portraying themselves, continued where the radio show had left off, with Ozzie (who directed, produced, and co-wrote the vast majority of the episodes) as the well-meaning but sometimes confused, bumbling patriarch, Harriet his sensible but gentle foil, David the dutiful, self-effacing older son, and Ricky the mischievous youngster. Things naturally changed over the next decade and a half, as the boys grew up, went to college, and got married, but the dynamic remained essentially the same. Ozzie and Harriet was nothing if not wholesome. The parents were decent, honest folks; never dictatorial or authoritarian, they guided their sons but gave them enough space to make their own decisions, and David and Ricky were as clean-cut as they come. Of course, there was also Ricky's emergence as a singing star. Broadcast in 1957, "Ricky, the Drummer" was his musical debut (he sings and plays the skins with surprising skill), and the boxed set does a decent job of charting his growth from a somewhat wooden 16-year-old into a legitimate musician with a great band (featuring James Burton on guitar) and undeniable charisma; Rick Nelson was no Elvis Presley, but he had far more substance than other teen idols of the era.

Fourteen years is a long run for any TV show (only The Simpsons has surpassed it in the sitcom category), and by the time The Adventures of Ozzie and Harriet started airing episodes in color in the '65-66 season, it had run out steam. Still, this is a classic bit of Americana that will find favor with old and new viewers alike. Bonus features include commentary on four episodes by David (the only living member from the original show) and Sam (son of Rick) Nelson, along with a 1949 radio broadcast, home movies, and more. --Sam Graham

Product Description
This features 24 classic episodes from one of the longest running & most enduring family sitcoms in the history of american tv. Studio: Uni Dist Corp (music) Release Date: 05/01/2007