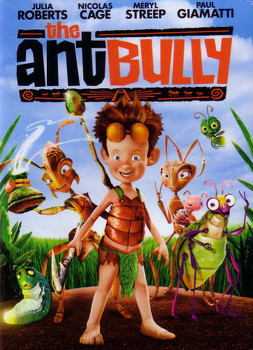 An all-star cast--including such A-list stars as Julia Roberts, Nicolas Cage, and Meryl Streep--lend their voices to The Ant Bully. Social misfit Lucas gets bullied by the bigger boys in his neighborhood, so he takes out his frustrations on the only things around smaller than him: An ant hill on his front lawn. After being flooded and stepped on, the ants fight back when ant wizard Zoc (Cage, National Treasure) develops a potion that shrinks Lucas down to bug-size. But Zoc's thirst for revenge gets foiled when the beatific ant queen (Streep, The Devil Wears Prada) decrees that Lucas must learn to live like an ant, and Zoc's girlfriend Hova (Roberts, Runaway Bride) takes up the task of teaching the unhappy boy how to value others over himself. The animation of The Ant Bully makes good use of scale as Lucas grapples with the gigantic world around him, but the writing is not so imaginative; the name actors are thrown away on bland characters and lackluster dialogue. The lessons Lucas learns are admirable (and amusingly Communist in flavor), but the way he learns them feels contrived and uncompelling. It's too bad, because there probably won't be many other movies featuring the combined talents of Meryl Streep and Bruce Campbell (Army of Darkness). Also featuring Ricardo Montalban (Star Trek: The Wrath of Khan), Lily Tomlin (Nashville), and Paul Giamatti (Sideways) as a sleazy exterminator. --Bret Fetzer

From Academy Award nominated filmmaker John A. Davis (Jimmy Neutron: Boy Genius) and producers Tom Hanks and Gary Goetzman (The Polar Express), The Ant Bully tells a witty and heartwarming story about a 10-year-old boy who embarks on a remarkable journey. New in town, friendless and tormented by a neighborhood bully, young Lucas Nickle has been taking out his frustration on the innocent ant hill in his yard. But one day the ants retaliate. Using a magic potion, they shrink Lucas down to ant size and sentence him to live like an ant in their colony. In this strange new world Lucas will learn important lessons about friendship, get a whole new perspective on life and ultimately find the courage to stand up for himself.