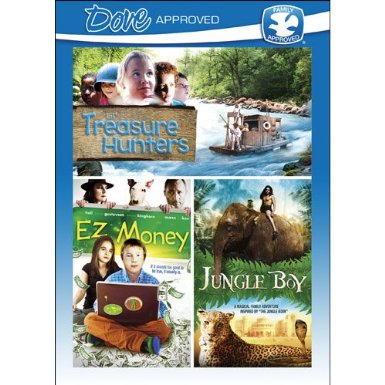 LIL' TREASURE HUNTERS
Nine-year-old Molly Brown lives and breathes the river. Since her mother died, it's been her, her dad Paul, and Cappy, her ailing grandfather. With Cappy's medical bills, Paul's only choice is to sell everything and move. But Molly can't leave her friends, and especially the river. She has to make a plan!

Years ago, her mother used to tell tales of a lost treasure hidden on the banks of the river—but was it just a legend? It's up to Molly and her friends, the ""lil river rats,"" to journey into the unknown, find the treasure, and stop Molly from moving.

EZ MONEY
Moli, a mischievous kid with a knack for computers, scores $3 million when she intercepts a Nigerian scam email. The ring scrambles to recover it, but they don't know who they're messing with: one internet-savvy kid! Moli, now a multi-millionaire, is always one trick ahead of the fraud ring and the CIA, who's operating an undercover sting operation to bust them. But Molly's get-rich-quick plan hits a glitch when her friend, Echo, is kidnapped by the con artists…her super sleuth skills will be put to the test!

JUNGLE BOY
In this magical family film, a young boy's life is changed forever when he becomes lost in the jungle and is rescued by Bono, a friendly elephant. Bono raises Manling among the animals of the wild until, sadly, he breaks jungle law and is banished forever. But when an evil treasure hunter threatens to destroy the jungle Manling loves, he must form an alliance with the animals to save his true home.