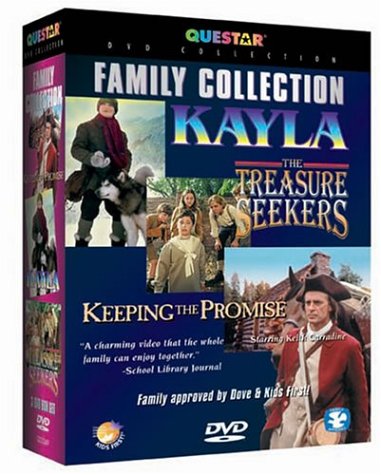 SKU:
Add to Cart
This collection presents three of our most popular family films for one special price! Kayla is a family film that makes you feel good. It focuses on a young boy who still can't accept the eight-year-old disappearance, and apparent death, of his explorer father. He cries out for solace, while keeping his mother and well-meaning stepfather at a stony-faced distance. Then, one day, in the snowy wilderness, he encounters a wolf who looks exactly like the dog that led his dad's sled. Despite the hostility of the townspeople, who fear the wolf is devouring their livestock, the boy bonds with this dog, Kayla, who teaches him a lot about love, loyalty, and self-sacrifice. In Treasure Seekers, a family discovers that love, togetherness, and perseverance lead toreal success and joy. In a classic story by Edith Nesbit, one of England's most beloved authors, five motherless children struggle to save their inventor father from financial ruin. Their well-meaning efforts invariably end in disaster despite the watchful eye of their neighbor, a dashing explorer (James Wilby). Richard Bastable (Nicholas Farrell), the father, has only a few days to save his family home as creditors increase their demands while he struggles with his difficult yet promising invention. In spite of the family's gallant efforts and the sympathy and help of Dr. Mary Leslie (Gina McKee), the end looms nigh. This all-star family classic will be enjoyed over and over. Keith Carradine and Annette O'Toole star in "Keeping The Promise, " a powerful family drama adapted from the best-selling novel "The Sign Of The Beaver" by Elizabeth George Speare that's become required reading in schools throughout the country. The film begins as the hopeful tale of a colonial family seeking a new and promising life in the deep wilderness of Maine in 1768. But their hopes, dreams, and very survival as a family are severely tested when the father reluctantly leaves his 13-year-old son, Matt, alone in the wilderness to protect their claim until he can return with the rest of the family and their belongings. Weeks of waiting turn into months, and months into seasons, as his family struggles against a deadly epidemic and other hardships in their journey to rejoin their boy. Young Matt's ability to survive his lonely and dangerous vigil becomes more questionable with each passing day...until he's befriended by a band of Penobscot Indians. The experience transforms Matt as his Indian benefactors teach him life's most important lessons about survival, trust, loyalty and hope. First seen on the CBS Television Network as a Clorox Diamond Presentation.