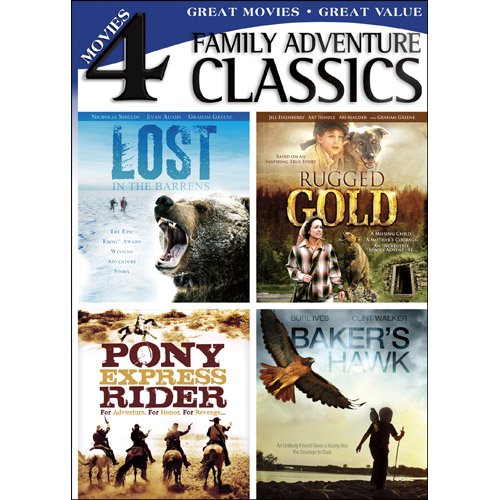 SKU:
Add to Cart
LOST IN THE BARRENS<BR> When Jamie, an orphaned teenager forced to live with his Uncle Angus in the wilderness, and Awasis, a young tribal hunter, become lost on a hunt, the two slowly learn to respect and depend on each other to survive an unforgiving land. <BR> <BR> RUGGED GOLD<BR> Rugged Gold follows Martha Martin's courageous journey in the Alaskan wilderness. A widowed socialite raising Lloyd, her son, Martha finds love again with Don, a rugged outdoorsman who convinces her to move north. When Lloyd and Don go missing during a dangerous earthquake, Martha is forced to endure an Alaskan winter on her own. <BR> <BR> PONY EXPRESS RIDER<BR> After his father is shot dead, Jimmy D joins the Pony Express in hopes of crossing paths with his father's killer. As he races across the West, Jimmy D carries both the U.S. mail and the memory of his father. A rousing Western adventure with a coming-of-age story at its heart, Pony Express Rider is also a genuine look at America's vibrant past. <BR> <BR> BAKER'S HAWK<BR> Because he's the son of a political leader in town, Billy Baker struggles to fit in. When he rescues an injured hawk, Billy takes it to Mr. McGraw, the town outcast who has a way with animals. As the two nurse the hawk back to health, the bond between boy, bird, and misunderstood recluse sparks newfound confidence and courage in Billy.