For One More Day DVD 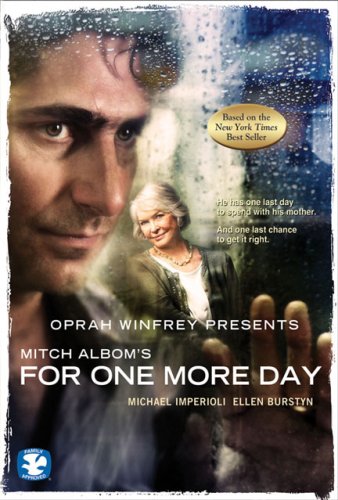 SKU:
Add to Cart
Ellen Burstyn, Michael Imperioli. A former baseball player in the throes of alcoholism plans to take his own life when he's saved by his departed mother, who shows him the way to redemption. Based on the New York Times bestseller. 2007/color/92 min/NR/widescreen.

For One More Day revolves around reunions: producer Oprah Winfrey with author Mitch Albom (Tuesdays with Morrie) and actors Michael Imperioli with Ellen Burstyn (The Five People You Meet in Heaven). Mostly, it reunites a son with his mother. In this smaller-scale follow-up, alcoholic ex-baseball player Charles "Chick" Benetto (Imperioli) relates his story to a writer (Emily Wickersham, Imperioli's Sopranos co-star). Nine years before, he attempted suicide after his estranged wife, Catherine (Cara Seymour), neglected to invite him to their daughter's wedding. Delirious after an auto accident, he wishes he could've spent one more day with his late mother. A visit to their old house brings back childhood memories (Imperioli's son, Vadim, plays Benetto as a boy). The next thing he knows, Posey (Burstyn) appears before him, looking just as she did the last time he saw her. Benetto wonders if she's a ghost or a delusion. While they reminisce, the narrative shuffles between the three time periods (Samantha Mathis plays the young Posey). Benetto remembers the way his mother doted and his father, Len (Scott Cohen), dispensed the discipline. He also recalls turning against Posey when their marriage went south. Loosely inspired by It's a Wonderful Life and originally broadcast during the holiday season, Albom's adaptation argues that it's never too late to change and that no one ever really knows their parents. The multi-layered structure confuses as first, but For One More Day makes perfect sense by the end, and Imperioli and Burstyn create a convincing mother-son relationship