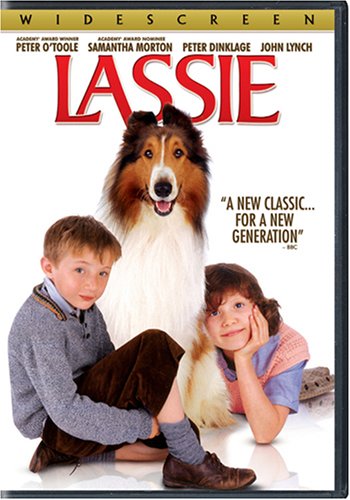 Based on Eric Knight's 1938 novel about a trusty pooch, "Lassie Come-Home," the film is set on the eve of WWII in a Yorkshire mining town. The Carraclough family is forced to sell Lassie to the Duke of Rudling when the family falls on hard times. When Lassie finds herself transported five hundred miles away to live in the Duke's remote castle in northern Scotland, she is determined to defy the odds and return to her home and the boy she loves. So begins an incredible adventure, set against a stunning series of British landscapes that sees Lassie facing dangers natural and human and finding help in unexpected places as she makes her way across the country, to reach home in time for Christmas.

You probably don't think you need to see another remake of Lassie, but you do. Charles Sturridge's (Brideshead Revisited) film was criminally neglected in theaters but should gain a lofty status on home video as did remakes of The Secret Garden, A Little Princess and Sturridge's own FairyTale: A True Story. It's a simple story of a dog who loves a boy so much she'll cross a country to reunite with him. Yes, you might need your handkerchief. No, not that much. Mom Sarah (Samantha Morton), dad Sam (John Lynch) and their son Joe (an adorable Jonathan Mason) live in an English coal town shortly before the Second World War. To put food on the table, Lassie is sold to The Duke of Rudling (Peter O'Toole, in fine form) for his granddaughter, Cilla (Hester Odgers). Soon the Duke and Lassie retire to Scotland, some 500 miles away, but neither distance, status, an angry kennel man, nor bumbling dog catchers will keep Lassie from Joe. Along the roads and hills of England (with Ireland scenery subbing in), Lassie touches many folks including a lovelorn lady (Kelly MacDonald), a scientist (Edward Fox), and most notably, a traveling performer (Peter Dinklage). Sturridge's deft touch allows the film to breathe with a great sense of physical comedy for the kids that never descends into pure shenanigans. There is just enough heart-tugging to go along with the scenic adventure. The cast is uniformly strong, with fine work from O'Toole, Morton, and Dinklage. Throw in beautiful scenery, cute dogs, Adrian Johnson's dramatic score, a cameo from the Loch Ness monster(!), and you have a winner; our pick for the best family film on DVD in 2006. Ages 5 and up.