SNOW WHITE-THE FAIREST OF THEM ALL (HALLMARK) DVD 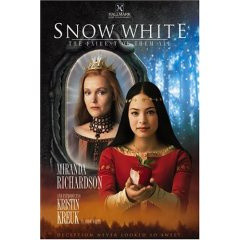 From the Back Cover
The dark wonder of the Brothers Grimm, the quixotic imagination of producer/writer/director Caroline Thompson (The Addams Family, Edward Scissorhands), state-of-the-art special effects by Sextant Visual Effects and the breathtaking spectacle symbolic of Hallmark Entertainment combine for a visionary retelling of the classic fairy tale.... Born from a drop of blood in a flutter of apple blossoms, Snow White (Kristin Kreuk, Smallville) is the blessing of a loving peasant couple, John (Tom Irwin, The Sandy Bottom Orchestra) and Josephine (Vera Farmiga, 15 Minutes) - although her birth brings with it a curse of death and starvation. Salvation comes unexpectedly when John's tears melt the frozen tomb of a bewitched creature, the Green-Eyed One (Clancy Brown, Starship Troopers), who grants him three wishes: nourishment for Snow White, a kingdom and a queen. But John's cause for celebration is short-lived. The Green-Eyed One has devious plans to please his own family. Owing his loathsome spell-casting daughter, Elspeth (Oscar nominee & Golden Globe winner Miranda Richardson, Merlin), a long-awaited wish, he encourages her desire for the throne with a kingdom to rule, a king to belittle and a young stepdaughter to toy with and destroy at will. The castle awaits. A looking glass is calling. And a fairy tale like no other begins.... This splendid rendition of the beloved tale thrills with magical mirror slivers, wicked curses, spellbinding romance and magnificent visual effects. Indeed the fairest of them all, this epic fantasia from Robert Halmi, Sr. and Robert Halmi, Jr. (producers of Hallmark Entertainment classics such as Alice in Wonderland and Arabian Nights) will enthrall the entire family with pure storytelling magic.