SIXPENCE NONE THE RICHER CD 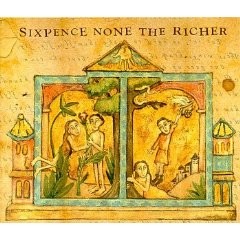 SKU: 1900
Add to Cart
Amazon.com
Some songs define moments in our lives we will never forget. They're songs that years later can evoke the sights, sounds, and even smells of the time we first heard them. "Kiss Me," the red-hot, irresistible single from this self-titled release, will probably be one of those songs for the many who've by now experienced its charms. The culprits? A trio of youthful central Texans, by way of Nashville, called Sixpence None the Richer. On the rest of this Grammy-nominated gem, Sixpence serve an airy blend of Abra Moore-meets-Sundays acoustic pop. It's beautifully rich and constantly augmented by Leigh Nash's earthy vocals, Matt Slocum's songwriting genius, and steady rhythms from Dale Baker. Like Jars of Clay, Sixpence have "raised the bar" for the rest of late-'90s contemporary Christian music. --Michael Lyttle

From CCM Magazine -- Subscribe Now!
If you really want to know where Sixpence None the Richer has been the past two years, you have two choices. You can spend 15 minutes reading the oh-so-finely crafted story that graces the cover of this very magazine, or you can spend 15 minutes (give or take a few seconds) listening to the first three tracks on the band's new release, its self-titled debut on Steve Taylor's new label.

Those songs, especially "Anything" and "The Waiting Room," possess a seamless segue and a common denominator of being the quietest indictment of the music industry ever to be burned into a compact disc.

If you've followed Sixpence's saga over the past couple of years, you know of the struggles and travails the band experienced in trying to get out of its previous record deal. These two songs force you to come to grips with the fact that making music isn't always fun and games, and the business can rip relationships apart.

If there's anything positive to come out of the band's forced hiatus from the studio, it manifests itself in experience with their instruments and ideas. Sixpence None the Richer is a much deeper, more focused recording than '95's This Beautiful Mess, with Leigh Nash wielding a much more confident vocal, Dale Baker providing a fascinating percussive backdrop to the delicate songs, and guitarist/songwriter/arranger Matt Slocum getting to realize his ideas with intricate strings weaving in with his pop guitar riffs.

New label honcho Taylor also wears the hat of producer for this project, providing a sensitive touch on the boards for a band that is light-years stylistically from his past production credits, be it his own work, Newsboys or Guardian. He (and engineer Russ Long) treats Nash's vocals with the proper respect and care, as well as allowing Slocum to experiment sonically.

To best experience Sixpence None the Richer, light a couple of candles, put the record on your stereo and darken the room. Let the quiet sonic textures wash over you, and near the end of the album's 48 minutes, stare at the candle. You'll see (allegorically, at least) what the band Sixpence None the Richer is now seeing: the light at the end of a very dark time. -- Lucas W. Hendrickson (c) 1997 CCM Communications, Inc