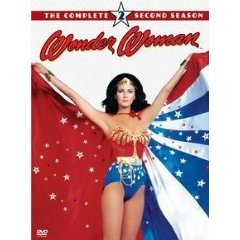 "In your satin tights / Fighting for your rights / And the old Red, White, and Blue!... / Wonder Woman!" Could anyone who grew up in the '70s ever forget that super-catchy theme song? Originally packaged as the female version of the Batman TV show (producer Stanley Ralph Ross penned 32 of the caped crusader's episodes), Wonder Woman ended up redefining the campy, comic book genre. The primetime show immediately became a social and cultural phenomenon, attracting a wide audience that continued to tune in to America's favorite socially progressive superheroine.

With World War II coming to an end, what will Amazonian Diana Prince (Lynda Carter) do for Wonder Woman's second season? Sporting the biggest continuity jump in TV history, Wonder Woman's new network (now on CBS from ABC) decided to catapult the show 35 years into the future into "modern day" Los Angeles, 1977. Not surprisingly, the 35 years haven't aged the immortal one bit. In fact, she seems to have gotten stronger, her super powers have increased, and her mind is sharper and focused on fighting the evils of the modern world: nuclear weapons, terrorists, aliens, and the mind controlling influences of rock music. Season 2 kicks off with the awesome hour-and-a-half season premiere, "The Return of Wonder Woman." Returning once again from Paradise Island, Diana Prince (a.k.a. Wonder Woman) teams up this time with former colleague Major Steve Trevor's son (still played by Lyle Waggoner) to protect humankind and to keep Paradise Island hidden from the free world. In the 21 episodes that follow, Wonder Woman will take on a nuclear facility planning to build near Paradise Island, a mad scientist plotting against the super heroine with telekinesis, mind-stealing aliens from outer space, an evil toymaker's demented androids, and a rock star(Martin Mull?!) who is using hypnosis to control the minds of his fans. In this new millennium, Wonder Woman may seem a bit cheesy to some, but to others this show and Lynda Carter represent the pinnacle of '70s television culture. Wonder Woman: The Complete Second Season is a completely satisfying guilty pleasure for those who want to indulge. --Rob Bracco

Product Description
What's Wonder Woman up to now? Flash forward 35 years from her stirring Season-One adventures defending America in World War II. Without missing a beat, Wonder Woman leaps from the big-band era to the disco decade, still miraculously young and still using wits, wiles and astonishing powers to fight evil. Season Two (21 episodes following a feature-length season premiere) introduces Wonder Woman to a new America of nuclear power and computers. Teamed with Steve Trevor, son of the dashing major she worked with during World War II, she takes the name Diana Prince - and takes on all kinds of danger from terrorists, mad geniuses, crooks and even a diabolical rock star while working for America's Inter-Agency Defense Command. Wonder Woman, we're proud you're on our side!