Testament: At the Creation of the State of Israel 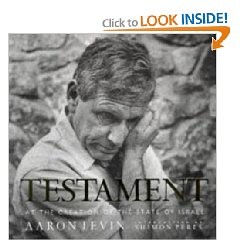 Amazon.com Review
Israel's story is etched in the faces of the men and women who as soldiers, farmers, nurses, teachers, and settlers wrested Palestine from Great Britain to create the state of Israel and have defended it ever since. Their tale is primarily one of war--with the British, to emancipate the state; with the land, to reap a harvest from the barren desert; with their neighbors, many of whom also consider the area their home. On the occasion of Israel's 50th anniversary, photographer Aaron Levin photographed Israelis at locations that were important to them during the struggle for independence and for peace. The black-and-white portraits complement snapshots of the subjects taken decades earlier at the same spot: Shlomo Hillel sits in an underground ammunition factory he helped build beneath a bakery in Rehovot; Ahuva Dunayevsky poses with a cat on the balcony from which she signaled incoming supply planes during the siege of Jerusalem; the late Chaim Herzog, a president of Israel, stands along the path he designed to smuggle supplies into the capitol; Leah Rabin sits in her office, framed by a photo of her slain husband. Each of these people shares a memory to accompany his or her portrait, but their faces, lined with experience, express much more than any words can convey. As Shimon Peres writes in the introduction to Testament: "Aaron Levin's photographs put a face on history, preserving forever the personalities who in manners great and small founded the state of Israel. The portraits speak for themselves."

From Booklist
Testament is a book of portraits and personal stories of 83 men and women who played a part in the struggle to establish the state of Israel. Some of the individuals are well known, including former prime ministers Shimon Peres and Yitzhak Shamir, authors Amos Oz and A. B. Yehoshua, former president Chaim Herzog, and former Jerusalem mayor Teddy Kollek. But most of the people are ordinary folk whose lives encompassed an extraordinary moment in Jewish history, as soldiers, spies, saboteurs, and kibbutz workers in the fight to form a Jewish state in Palestine. Each narrative is accompanied by a black-and-white photograph, and some have a photo of the interviewee as a young man or woman. This moving tribute to those daring pioneers, which includes an introduction by Peres, comes on the eve of Israel's fiftieth anniversary. George Cohen