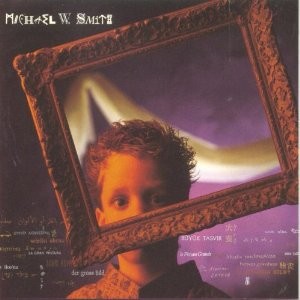 Encouraged by the chart success of his first two releases, Michael W. Smith spent seven months in the studio in 1985 and '86 and the result was this ultraconfident-sounding recording. The Big Picture is buoyed by "Old Enough to Know" and "Rocketown," two magical numbers that are clearly aimed at the youth market. The former is an encouraging ballad to a young girl who struggles with her sexuality, while the latter is a semiautobiographical tale of Smith's small-town meeting with a traveling minister. The ensuing outcome is Smith's conversion to Christianity. The essential element here comes from Smitty's merging of radio rock-pop and a Christian message. The well-produced result helped change the direction of contemporary Christian music. --Michael Lyttle

Stepping beyond the horizons many Christians have come to accept as music we term "contemporary," Michael W. Smith has gone off in search of a truly big sound. Somewhere between the eclectic pop melodies of Scritti Politti and the commercially adept studio wizardry of the likes of rock formulists Toto and Alan Parsons Project. M.W. Smith has anchored his aggressive third release The Big Picture, to a more thoroughly modern and pervasively relevant pop/rock style. Also traded in are the churchy colloquialisms common to music made for Christians. Smith moves to a more inventive and effective parabolic approach, which offers a realistic faith and hope as a means to life in the real world.

Compassionate images and heartfelt concern open a window of grace on lives stifled in darkened corners of mediocre existence as Smith takes on the poignant issues of his youthful audience: self-esteem, peer acceptance, teen suicide, immature sexual expression, and living in the will of God. In compositions written with Wayne Kirkpatrick (Amy Grant also adds her two bits on "Lamu"), Smith uses memorable melodies and danceable rhythms to drive home how life's decisions affect our attempts to move to the beat of the cosmically different drummer.

While stretching beyond what some of his fans Smith has made a bold effort to communicate the gospel of Jesusequated in one song with "all the love you need" to those who struggle with the choices and voices of our world that come from both without and within the confines of the Christian music subculture. The much-debated controversy over Grants unguarded will no doubt continue with Smith as new fodder, but the point is moot given the clearly articulated faith in Jesus that Smith sets as the basis of a clearly Christian standard for moral decision-making and this standard permeates each track of The Big Picture.

Smiths keyboard finesse dominates the multi-textured tracks as the digitally mastered sonic sounding board moves from layers of percussive 80s drum sounds to gutsy guitars in a broad and lush stereo oasis. One can only applaud a record of such high craftsmanship, timeliness and integrity. The big question is whether Michael W. Smith fans can follow his lead into bigger sound and catch his vision of The Big Picture