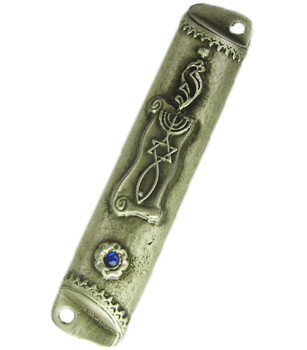 The Hebrew Shin representing the word God in Heberw is on top with a Blue stone imbedded  on the bottom.

The Parchment scroll is included with each mezuzah we sell

the first letter of God's name (the letter Shin)

Mezuzah (Heb.: doorpost), because it is placed upon the doorposts of the house.  it is a  reminder of God's presence and God's mitzvot (commandment).

The commandment to place a mezuzah on the doorposts of our houses is derived from Deut. 6:4-9, a passage commonly known as the Shema (Hear, from the first word of the passage). In that passage, God commands us to keep His words constantly in our minds and in our hearts, by (among other things) writing them on the doorposts of our house. The words of the Shema are written on a tiny scroll of parchment, along with the words of a companion passage, Deut. 11:13-21. On the back of the scroll, the name of God is written. The scroll is then rolled up and placed in the case, so that the first letter of the Name (the letter Shin) is visible (or, more commonly, the letter Shin is written on the outside of the case).

How to install a Mezuzah:

The case and scroll are then nailed or affixed to the right side doorpost on an angle, with a small ceremony called Chanukkat Ha-Bayit (dedication of the house - yes, this is the same word as Chanukkah, the holiday celebrating the rededication of the Temple after the Maccabean revolt against Greece). A brief blessing is recited. The procedure is to hold the mezuzah against the spot upon which it will be affixed, then recite a blessing:

Blessed are You, Lord our God, King of the Universe, Who sanctified us with His mitzvot, and commanded us to affix a mezuzah.

Why is the mezuzah affixed at an angle? The rabbis could not decide whether it should be placed horizontally or vertically, so they compromised!

Every time you pass through a door with a mezuzah on it, you touch the mezuzah and then kiss the fingers that touched it, expressing love and respect for God and his mitzvot and reminding yourself of the mitzvot contained within them.

It is ok or even recommended to remove a mezuzah when you move.