Highway to Heaven: Season One DVD 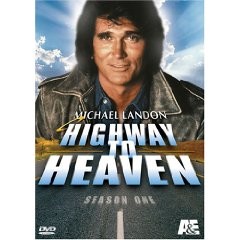 SKU: 8071
Add to Cart
The premiere season of Michael Landon's Highway to Heaven is consolidated into this collector’s edition box set of seven discs containing 24 episodes of faith and love. The television series (1984-1989) has a loyal following because of its compelling storylines and uplifting messages characteristic of Landon, an icon of family-friendly entertainment since the early days of Little House on the Prairie andBonanza. An angel on assignment from God is disguised as "everyman" Jonathan Smith in order to comfort--and sometimes miraculously guide--the lost and suffering through various dilemmas. Smith and his earthly cohort, ex-cop Mark Gordon (Victor French), journey across country to work as horse trainers, bellhops, baby-sitters--whatever the task requires. The collection leads with the two-part pilot episode that establishes Smith and Gordon's friendship. Other highlights of the collection include the two-part "Thoroughbreds" with guest star Helen Hunt as a woman who learns to risk love while battling cancer; and "Help Wanted: Angel" where Gordon is cast in a movie and falls in love with the leading lady. Especially poignant is a bonus documentary, "Michael Landon: Memories with Laughter and Love," a tribute to the prolific star including film clips and reminiscences by family members. (Ages 8 and older) --Lynn Gibson

Product Description
Jonathan Smith isn't your average helpful handyman. He's an angel with a mission from God, or "the Boss" as he likes to call him. Accompanied by ex-cop Mark Gordon, whose troubled life Jonathan once helped turn around, he travels the world, guiding the lost and suffering back toward the HIGHWAY TO HEAVEN. Whether helping a young boxer pressured to throw a fight or a veteran's Eurasian daughter feel welcome in America, Jonathan finds a way to bring a little grace and love into the lives of those he touches. And when necessary, he helps things along with a little angel power. Starring Michael Landon and Victor French, all 24 uplifting episodes from the first season of this family favorite are now available on DVD for the first time. DVD Features: Feature-Length Documentary "Michael Landon: Memories with Laughter and Love"; Rare Outtakes;Text Biographies of Michael Landon and Victor French; Interactive Menus; Scene Selection