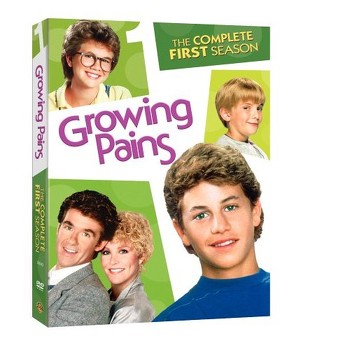 SKU: 9247
Add to Cart
This four-disc set offers two welcome opportunities to be reunited with the Seaver family. The first is all 22 episodes of this 1985 sitcom's inaugural season, which resurrected the career of failed talk-show host Alan Thicke, and catapulted Kirk Cameron to teen-idol status. The second is a near-half-hour present-day campfire chat with all the cast members, including Joanna Kerns (conflicted working mom Maggie), a hearty and seemingly healthy Tracey Gold (brainy daughter Carol), and Jeremy Miller (precocious younger son Ben). Joined by writer Tim O'Donnell, they share memories of how each was cast, their fond memories of the show and dealing with fan adulation. Growing Pains did not really suffer any. It cracked the Top Ten in its first season, and while the cast members are not the most natural comic actors, by season's end their bond is palpable and the characters really do seem like family. Thicke's Dr. Jason Seaver is a sitcom anomaly: a work-at-home dad. He has moved his psychiatric practice into the den after Maggie takes a job as a journalist. His belief system is put to the supreme test by his three children, especially 15-year-old Mike (Cameron), whom Maggie calls "a hormone with feet." In the pilot episode, no sooner does Jason agree to give Mike more independence, then Mike is jailed for joyriding in his older friend's car.

Growing Pains does have a tendency to go for the easy laugh by having the kids--especially 9-year-old Ben--spout age-inappropriate jokes ("It was all so clinical," he complains at one point to Maggie after Jason bandages a scrape). But the series did admirably touch on some hot button family issues. In "The Seavers vs. the Cleavers," Annette Funicello guest stars in a rare mean role as a parent who disapproves of Maggie choosing to work "just when her children need her the most" (a nifty little retro joke: "Ward, I'm worried about the Seavers"). In "Superdad!," Maggie is upset that Carol turns to the ever-present Jason and not to her for advice. Refreshingly, not all problems are solved by episode's end. In the same episode, a boy the esteem-challenged Carol has an unrequited crush on does not miraculously materialize to ask her to the dance. In addition to the cast reunion, this set contains an interesting extra: the unaired version of the pilot with a less telegenic (but perhaps more in character) Elizabeth Ward in the role of Carol. For those who grew up with the Seavers, and in need of a retro blast of '80s nostalgia, Growing Pains will still, to quote the theme song, show you that smile again. --Donald Liebenson

Product Description
Meet the Seavers in this hilariously successful late eighties sit-com about a family of five living out on Long Island. Maggie has recently rejoined the workforce as a journalist, leaving Jason, a psychiatrist, to juggle his responsibilities to his patients and his three kids by working from home. Mike's the oldest and possibly the most difficult to handle! Whether it's for girls, dirt bikes or The Boss, Mike uses his charming smile to finagle his way into trouble. The youngest, Ben, tries to tag along with his big brother learning to be a little con-artist in his own right. And amid the chaos, Carol, the middle child, tries to keep her head on straight and maintain her straight-A status at school. Join the Seavers as they experience the growing pains of family life, including a few disputes sprinkled in among lots of love and laughter.