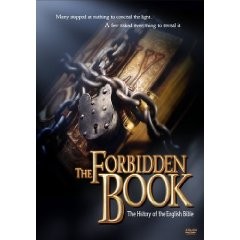 SKU: 8096
Add to Cart
DISCOVER THE FASCINATING STORY BEHIND THE PRESERVATION OF THE BIBLE.

During the Dark Ages, superstition and ignorance controlled the minds of the masses.
A few brave men obeyed God and brought the Scriptures to the world.

- John Wycliffe, the brilliant 14th century Oxford scholar, translated the Bible from Latin into English in order to enlighten the masses oppressed through ignorance. His work was so despised by the established church, that Pope Martin V ordered Wycliffe's bones to be dug up and burned forty years after his death.

- Martin Luther was one of the few who challenged church authority in the 16th century and lived to tell the tale. In exposing the folly of indulgences (paying money to the church in order to obtain favor with God), he revealed what had always been written in Scripture, that justification was through faith and faith alone.

- William Tyndale was not spared like his friend Luther. Tyndale spent the last 500 days of his life in a cold castle dungeon. He was then tied to a stake, strangled, and burned. His crime?.. printing Bibles in the English language!