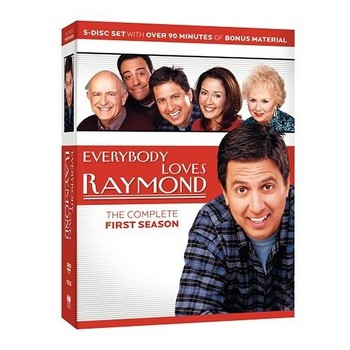 "Hi, I'm Ray and I live here in Long Island with my wife, Debra." Thus Ray (Ray Romano) introduces himself in the opening to each episode of his Emmy-winning comedy series. He proceeds to mention their children (Ally, Michael, and Geoffrey), then notes as an aside, "It's not really about the kids." He's right--it isn't. They don't even appear in each episode. Everybody Loves Raymond looks like any other family sitcom, but isn't. Everything is just a little bit better. Sure, it isn't as clever as Seinfeld (on which Romano and Brad Garrett appeared in their early days) or as sophisticated as Frasier; nor is it trying to be. The real subject of the show is Ray's relationship with Debra (Patricia Heaton), parents Frank and Marie (Doris Roberts and Peter Boyle), and brother Robert (Garrett).

Everybody Loves Raymond trains a microscope on the day-to-day ephemera of Ray's life. And since he's a sportswriter, a number of sports stars made guest appearances during the first season, including Kareem Abdul-Jabbar ("Frank, the Writer") and Terry Bradshaw ("Debra's Sick"), but this will happen less often in the years to come.

On the surface, Ray has an ideal life, but he's always trying to please everyone; and someone inevitably feels left out. Sometimes it's Debra, sometimes Frank and Marie, sometimes Robert, and sometimes his buddies (including King of Queens star Kevin James). Then there are his in-laws (Katherine Helmond and Robert Culp). If this were a different kind of show, Ray would have a breakdown at the end of each episode, but instead he finds a solution to each problem--and it usually comes from Debra. In short order, Everybody Loves Raymond became a top-rated program, with several cast members winning Emmys--numerous times in the case of small-screen scene-stealer Doris Roberts. -- Kathleen C. Fennessy

Product Description
Standup comedian Ray Romano stars as Ray Barone, a successful sportswriter who deals with his brother and parents, who happen to live across the street. Patricia Heaton ("The Goodbye Girl"), Peter Boyle ("While You Were Sleeping"), Doris Roberts ("Remington Steele"), and Brad Garrett ("Gleason") round out the stellar cast.