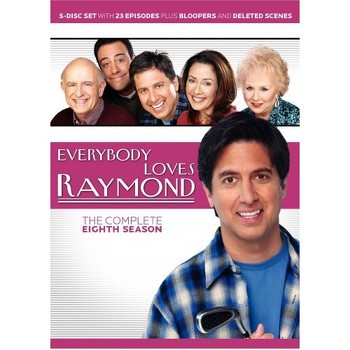 A recurring theme throughout Everybody Loves Raymond's excellent eighth season might be, "No good deed goes unpunished." In the episode "Misery Loves Company," annoyingly happy newlyweds Robert (Brad Garrett) and Amy (Monica Horan) offer unwanted marriage advice to Raymond (Ray Romano) and Debra (Patricia Heaton) and even in-laws Frank (Peter Boyle) and Marie (Doris Roberts), who gives them a reality check on what marriage really is ("You plow through"). In "The Ingrate," Raymond pays tribute to Debra in his newspaper column after forgetting to acknowledge her in a speech, only to raise the ire of a resentful Marie. In "Debra at the Lodge," Debra volunteers at Frank's lodge, only to become an object of lust for the randy elderly members (this season, Debra begins to blossom as a suburban goddess in the grand Laura Petrie tradition).

After eight seasons, we know these characters like our own family members. So, much of each episode's comedy is built upon our anticipation of how they will react to each other, as when Marie catches Raymond and Debra in an escalating series of lies or when the Barones share Thanksgiving with Amy's more uptight family, who, she observes at one point, "wouldn't yell if they were on fire." In one of the season's best episodes, Debra seizes on a rift between Marie and family newcomer Amy over thank-you notes to shift the balance of power from the manipulative and Machiavellian Marie (as always, a losing battle).

Raymond is one of those rare sitcoms that stayed on top of its game during its nine-year run. This penultimate season is filled with classic episodes and priceless moments. The incisive and intimately observed writing, brought to life by the peerless, Emmy-winning ensemble, could turn on a dime from funny to genuinely moving. In "Golf for It," the season finale, Raymond and Robert pull an all-nighter waiting for a tee-time. Their conversation turns to the indomitable Marie, and which of the brothers will care for her in her dotage. Marriage, as Paul Rudd's character observes in Knocked Up, "is like a tense, unfunny version of Everybody Loves Raymond." But the secret to Raymond's enduring success is that it's funny because it's true. --Donald Liebenson

Product Description
Standup comedian Ray Romano stars as Ray Barone, a successful sportswriter who deals with his brother and parents, who happen to live across the street. Patricia Heaton ("The Goodbye Girl"), Peter Boyle ("While You Were Sleeping"), Doris Roberts ("Remington Steele"), and Brad Garrett ("Til Death") round out the stellar cast.