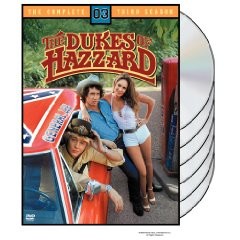 Season 3 finds The Dukes of Hazzard coasting on its popular 1980s formula. Cousins Bo (John Schneider) and Luke (Tom Wopat) Duke are still tearing up the road in their '69 orange Dodge Charger, the General Lee, while Boss Hogg (Sorrell Booke) everlastingly tries to frame them for everything from the theft of his cutlery at the Boar's Nest ("The Hazzardville Horror") to the heist of Stonewall Jackson's sword ("Along Came a Duke"). Meanwhile, leggy cousin Daisy (Catherine Bach) adds some dimension to her eye-candy character by becoming a reporter for the Hazzard Gazette ("By-Line, Daisy Duke") and a kidnap victim ("Enos Strate to the Top") whose innocuous photographs of Uncle Jesse (Denver Pyle) in Atlanta happen to capture a couple of bank robbers in action.

The predictability of the show in its third year by no means makes the series, created by writer-producer Gy Waldron (Moonrunners), anything less than shameless, tongue-in-cheek fun. Booke's cartoonish villain remains an outlandish self-caricature, chortling over every (doomed) opportunity to nail the Dukes and/or take Uncle Jesse's farm through a crooked boxing match ("And in This Corner, Luke Duke"), a bank robbery set up (by Hogg) to appear that Bo and Luke pulled off the crime during the wedding of Sheriff Rosco P. Coltrane (James Best, in "Mrs. Rosco P. Coltrane"), and even by pretending to be amnesia victim Bo's father ("My Son, Bo Hogg"). After some cast uncertainty in season 2 (boycotts, etc.), things have mostly settled down and Booke's popularity is obviously in ascendance at this point in the show. Special features here include a special welcome by Schneider, Wopat, and Bach, and on-camera commentary by the same trio. --Tom Keogh

Product Description
Get revved up and ready to go in 2005! Following the phenomenal success of Dukes of Hazzard Seasons One and Two on DVD Warner Home Video will release Season Three on May 31st complete with a FREE Movie Ticket* to the theatrical release starring Jessica Simpson Sean William Scott Johnny Knoxville Burt Reynolds Willie Nelson and more! With the #1 performing Action-Adventure classic TV series on DVD the much-anticipated theatrical release and the return of series to cable TV 'The Year of The Duke Boys' is here! Season Three contains 23 action-packed episodes